A long time ago I was a Magic: The Gathering player. And I would have been what I consider a “Casual Tryhard.” I wanted to be competitive but never had the resources (time, money, personality), to do so. Some would also consider me a scrub. But as a Casual Tryhard, I devoured strategy articles (Jamie Wakefield was my favourite author), and the first article that completely blew me away from a strategy point of view was Mike Flores’ “Who’s The Beatdown?“

I loved the concept so much that I even wrote an article about it for the game Race for the Galaxy (highly recommended to all of you who like competitive card games; it was my Cardboard Crack for a good 3 years.) I’d been looking for something to replace Magic in my life; unfortunately all of my regular playing friends moved on to other things).

This concept was briefly explored in Episode 11 of The Winning Agenda, but I’d like to try and delve into it a bit more. Certainly, this only represents my own point of view on the subject.

In essence, the concept of Who’s The Beatdown? comes down to:

The original author used mirror matchups in Magic to illustrate his point; when two similar decks play against each other, both cannot execute the same strategy at the same time, because, due to minor differences in deck choices and board state, one deck will be better than the other in executing that strategy. Therefore, the other deck needs to deviate from the original strategy in order to have a chance at winning.

But how do we apply this to Netrunner, which does not have mirror matchups?

Let’s examine the concept of your ‘Role’. And let’s do this at both a macroscopic and microscopic level.

For the purposes of illustrating my point, I’m not going to use the terms ‘Beatdown’ and ‘Control’ until the end, as it will confuse matters given that I’m not referring to the traditional definitions of ‘Beatdown’ and ‘Control’ (Beatdown usually meaning the deck that’s playing aggressively and tries to win quickly and Control being the deck that slows down the game and reacts accordingly to the opponent).

Now, of course, the opposing deck will also have its own offence and question. It 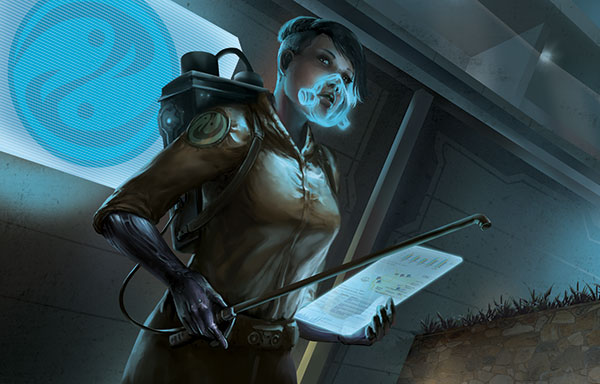 then falls to the player(s) to evaluate which decks’ offence or question is stronger, in which case, the role of the deck with the stronger offence is to execute its offence as well as it can, and the other deck will have to go on defence; i.e. deviate from its original strategy to disrupt the opposing game plan.

Why are good decks good? Because they have questions that demand answers.

“I am going to set up an unassailable credit lead with Sundews and Mental Health Clinic, and then win by setting up a remote server that you need to get into multiple times. In the meantime, my agendas protect themselves by 1) being expensive to steal (NAPD), 2) by being ridiculously hard to steal (The Future Perfect), and 3) by being scarce (only 8 or 9 agendas in the deck). Furthermore, I have very taxing ICE that you need to pay through your nose to get past. Can you deal with this?”

How about Near-Earth Hub Astrobiotics?

“I’m going to get good economy with cheap operations and expensive to thrash assets. After that I’m going to win by scoring out of hand with 3 different fast advance tools. In addition, I have assets (Daily Business Show), and operations (Fast Track), that help me break out of an R&D lock. Can you deal with this?”

I’ve purposely phrased the above paragraphs as such, because I am actually listing out what I believe to be the pressure points, (you might have heard Shielsy mention this multiple times before in the podcast), of these decks.

You can approach the issue in 2 ways:

For the Replicating Perfection example, you could answer the question by:

1) Stop them from setting up an unassailable credit lead by contesting each Sundew and Mental Health Clinic as they come along, (usually a fairly good response, in my experience, provided you don’t go broke in the process).

2) Find a way to get into that remote server multiple times, (no real way of doing this well against Caprice, Nisei tokens, and ASH).

You’ll usually have a chance to win (as opposed to having no chance to win), if you are able to do a combination of some/all of the above.

Alternatively, your deck could pose a question that the opponent must answer before asking theirs. For example, you might be using a Noiseshop deck. Your milling pressure might be strong enough that they have to defend against that before they can execute their game plan, which buys you more time to execute your game plan.

Some decks are peculiar in that their question is actually multiple answers. The best case example would be the current Calimsha PPVP Kate lists. That deck’s question is essentially: “I have dirt cheap burst economy and card draw that I’ll snipe the agendas that you put into your scoring server. If you don’t put agendas into your scoring server, I’ll Legwork and/or Maker’s Eye them out from your HQ/R&D.”

You’ll find that more often than not, once you get past the initial stage of figuring out who asks the questions and who provides the answer, the game will devolve into a fluid state, where, the roles change from turn-to-turn depending on the game state. You’ll be jockeying for a position where you are the one posing the question that demands an answer.

This is where you then need to examine your role on a microscopic level.

“What is my role this turn, knowing what I know about the overall roles that our decks are supposed to be playing, to get me to a state where I can be the one posing the question?”

And the answer to this will be different every time, depending on the decks and the evaluation of the game state.

I was playing NEH Astrobiotics against Desperado Kate. I knew that it wanted to use Professional Contacts to set up a gamestate where it could run efficiently and establish an R&D lock with multiple R&D Interfaces and The Maker’s Eye. Sure, I could potentially escape an R&D lock with Fast Track, but going for the usual game plan of shoring up centrals and waiting to score out Astros with either Biotic Labor or SanSans was going to be a bad thing to do.

Two key plays here that I will note:

First, I rushed out an Astroscript behind an ICE first turn, as I knew it would be very unlikely that the opposing deck will want to sacrifice money and set up time to get to it. That worked. My opponent got a first turn Professional Contacts, and I knew I was then on a clock before he could set up an R&D lock. I did not draw into a second Astro, so at one point in the game, I decided to Fast Track for an Astro and let it sit in HQ for one turn (with 4 cards in HQ), to score out the next turn. My opponent was still in the setting up phase, but already had a Self-modifying Code on board to get past my ICE protecting HQ.

Essentially the question that I posed to my opponent here was: “I don’t want you to continue setting up your board. I now have my 2nd Astro in hand which I will score out my next turn. Do you want to deviate from your game plan to come get it?”

If I had played conservatively and waited for Astroscripts to come and score them out one by one, then I am essentially leaving my fate to the order of the cards. Yes, Astrobiotics can certainly win this way, but I had evaluated my gamestate at that point and decided that I needed to do something different. One more turn of Kate setting up with Professional Contacts would have left me in an unwinnable position.

I won’t say who won that game, because I don’t think this is a situation where the end justifies the means.

In conclusion, when you next sit down in front of your opponent, you need to ask yourself the question: Are you the person who is:

1) Trying to execute your deck’s game plan or

If you are 2), then react. You are not the Beatdown now. But you need to become the Beatdown. Do something different. Change the status quo.

Because if you misevaluate your role in the matchup, you will lose the game.

crushedguava (Reddit/OCTGN/Netrunnerdb), is a guest writer for The Winning Agenda and an avid gamer. He listens to TWA during the long drive to his day job. He has multiple opinions but finds it difficult to articulate them. This is his first attempt at doing so.

Questions and Answers: How to Beatdown in Netrunner

3 thoughts on “Questions and Answers: How to Beatdown in Netrunner”